This week the administration released its first slate of judicial nominations, including nine women, seven of whom are women of color. The groundbreaking list of nominees includes Ketanji Brown Jackson, a nominee to the DC Circuit Court of Appeals, the country’s second-highest court. NCJW supports her nomination and encourages the Biden administration to continue to nominate and the Senate to confirm fair, independent, diverse, and qualified judges. 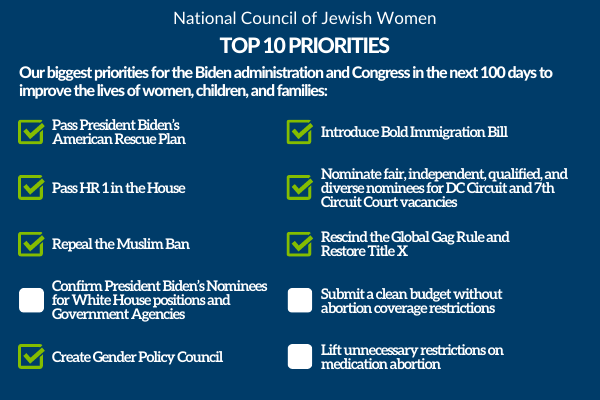 On March 30, President Biden released his intent to nominate 11 judicial candidates, including nominations to the DC Circuit and Seventh Circuit Courts of Appeals. Of the 11 candidates, 10 are lifetime appointments on the federal bench. NCJW is pleased to see the president holding to his past public commitments by releasing one of the most diverse nomination slates in US history. Two of the three women nominated to circuit courts are Black women: Ketanji Brown Jackson to the DC Circuit Court of Appeals, the second-highest court in the country, and Candace Jackson-Akiwumi to the Seventh Circuit Court of Appeals (currently an all-white court). It has been nearly ten years since a Black woman was confirmed to any circuit court. NCJW supports Ketanji Brown Jackson’s nomination.

For the past 20 years, National Council of Jewish Women has been a leading voice in the fight to ensure a fair and independent judiciary with an unwavering commitment to constitutional rights. Our powerful grassroots network educates their communities about the importance of the federal judiciary and advocates for court vacancies to be filled by nominees who are fair, independent, and qualified, and that our federal bench reflects the diverse communities it serves.

This week’s slate is an exciting start, but our work is only just beginning. Sign NCJW’s petition to the Senate urging them to confirm fair, independent, diverse, and qualified nominees who will ensure justice for all. Educate your community on why courts matter, and check NCJW’s CourtsMatter website often for updates on judicial nominations.

Anti-Asian bigotry:
In response to the tragic murders in Atlanta, President Biden announced new actions to address anti-Asian violence and xenophobia. They include:

For the People Act:
NCJW and Workers Circle are teaming up for “April Actions for Democracy” to advocate for the For the People Act (S1). This democracy reform bill would strengthen and restore voting rights, offer new protections for voters, end the dominance of big money in politics, and implement anti-corruption, pro-ethics measures to clean up government. Watch this call recording and dive into the April Actions for Democracy toolkit to learn how to take action.

American Jobs Plan:
On March 31, President Biden announced the next phase of pandemic recovery, titled the American Jobs Plan. The $2 trillion infrastructure plan includes a section on the care economy, including investing in childcare infrastructure, enabling a well-trained and well-paid home care workforce, and improving childcare, home care, and eldercare options. As an organization devoted to improving the lives of women, children, and families, we applaud the president’s commitment to the care economy, which we know is disproportionately shouldered by women and women of color.