A lot has happened since President Biden and Vice President Harris were sworn into office last Wednesday. The US House of Representatives transmitted one article of impeachment to the Senate, with a trial set to begin the week of February 8. We’ll be following this, as an impeachment trial in the Senate could delay President Biden’s agendas and the confirmation process of his nominees for agency and White House positions. In the midst of all this, NCJW was pleased by the movement — thanks to so many of your efforts — on many of our priority areas impacting women, children, and families. Read on to learn more about what happened, NCJW’s role in advancing our issues, and how you can continue to make a difference! 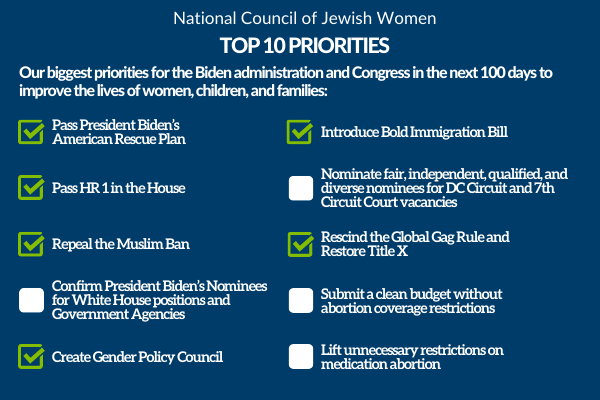 What is it
Earlier today the Biden-Harris administration took several important steps endorsed by NCJW to protect reproductive freedom both at home and abroad. Read our press statement here.

How does it relate to our past work?
NCJW has been supporting the Global Health, Empowerment, and Rights (HER) Act, a bill to permanently end the Global Gag Rule that was reintroduced in the 117th Congress by Reps. Barbara Lee (D-CA), Jan Schakowsky (D-IL), and Ami Bera (D-CA), and Sen. Jeanne Shaheen (D-NH) on January 28.

NCJW has been committed to restoring Title X, the only federal grant program dedicated to providing individuals, particularly those struggling to make ends meet and the uninsured, with comprehensive family planning and related preventive health services.  We recently joined the National Family Planning and Reproductive Health Association and other partners to urge the Biden-Harris administration to take these immediate and simple steps to restore Title X.

What can I do now?
There is still so much work to be done to protect and expand reproductive freedom. We are disappointed that the Presidential Memorandum did not address the Hyde or Helms Amendments or federal policy requiring pregnant people to pick up abortion medication in-person. These essential items are included in NCJW’s First 100 Days Priorities in addition to All* Above All’s First 100 Days Agenda for Abortion Justice and the Blueprint Coalition’s First Priorities (both endorsed by NCJW). While President Biden cannot single-handedly end Hyde or Helms, he can publicly reinforce his support for such actions and present a budget to Congress without the Hyde Amendment. As our first Catholic president committed to reproductive freedom, we hope he will set the tone that people of faith support abortion rights and access.

Take Action Today: Urge your members of Congress to support the Global HER Act and pass federal legislation to stop the relentless tide of these discriminatory policies and secure the constitutional right to abortion should the Court continue to chip away at or even overturn Roe v. Wade: the Women’s Health Protection Act and the EACH Woman Act.

What is it?
On January 4, the House of Representatives introduced HR 51, which would admit the District of Columbia as a state and grant it full voting representation in Congress. On January 22, its companion was introduced in the Senate as S 51.

How does it relate to our past work?
National Council of Jewish Women supports DC statehood as part of our Protect the Vote Promote the Vote campaign. NCJW CEO Sheila Katz spoke at a vigil for DC voting rights in 2019.

What can I do now?
Take action with NCJW to tell your elected officials you support DC statehood!

What is it?
On Day 1, President Biden issued an Executive Order on Preventing and Combating Discrimination on the Basis of Gender Identity or Sexual Orientation. The order implements the Supreme Court’s June 2020 ruling in Bostock v. Clayton County, which affirmed that employers could not discriminate against employees based on their sex, sexual orientation, or gender identity. President Biden directed federal agencies to enforce federal laws prohibiting this type of discrimination, including, but not limited to, employment, education, housing, and health care.

Also, On Day 6, the Biden administration repealed the Trump administration’s ban on transgender people serving in the military. The ban impacted an estimated 15,000 service members.

How does it relate to our past work?
National Council of Jewish Women works to end discrimination based on sex, sexual orientation, and gender identity. In Congress, NCJW lobbied to pass the Equality Act, which would codify non-discrimination protections. We worked within the executive branch to strengthen employment nondiscrimination protections and oppose carve-outs for religious organizations. NCJW opposed the transgender military ban.

What can I do now?
More work is required to ensure the Biden administration keeps LGBTQ rights and equality a priority. Call your elected officials (202-224-3121) and tell them to prioritize passage of the Equality Act or similar legislation to add sex, sexual orientation, and gender identity to the list of identities protected under the Civil Rights Act.

What is it?
On Day 1, President Biden issued an Executive Order On Advancing Racial Equity and Support for Underserved Communities Through the Federal Government. The order directs the federal government to embed equity principles, policies and approaches in its work. It also repeals the anti-diversity training and “1776 Commission” executive orders implemented under the Trump administration.

How Does it Relate to Our Past Work?
National Council of Jewish Women fights for laws, policies, and programs that promote racial justice and eliminate systemic racism and discrimination. This work includes using a reproductive justice framework, opposing police brutality, combating voter suppression. Our work on racial justice undergirds and infuses our approach to advocacy, education, and community service.

What Can I Do Now?
NCJW advocates must hold the administration accountable to the goals stated in this executive order. We must also continue our education and activism to advance racial justice. How?

On January 26, Rep. Bobby Scott (D-VA) and Sen. Bernie Sanders (I-VT) introduced the Raise the Wage Act. This legislation, which passed the House last Congress, gradually raises the federal minimum wage to $15 by 2025 and would increase pay for nearly 32 million workers.

On January 26, the Department of Justice rescinded the 2018 “zero-tolerance” rule memo that separated thousands of families at the US border.

In last week’s issue, we wrote about President Biden’s American Rescue Plan. We are pleased to share that the total child care funding, when combined with other passed-COVID bills, now reaches our ask of $50 billion! Thanks to your incredible advocacy to make this happen. $50 billion might seem like a lot, but it is the exact amount needed to ensure the childcare industry is able to continue and thrive. We know that when families have access to childcare, it helps children and it helps women.  Urge your lawmakers to pass the president’s plan swiftly!

Last week, we celebrated President Biden’s 100-day moratorium on deportations. However, this week, the Southern District of Texas issued a temporary restraining order blocking the moratorium, meaning deportations can fully resume. The next stage, expected very soon, will be a hearing on whether this temporary block becomes permanent as the case makes its way through the courts.