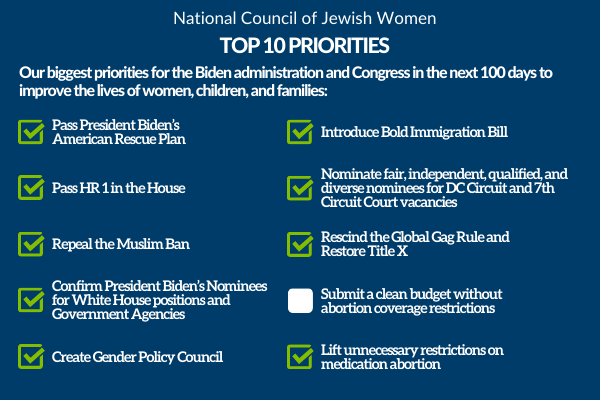 Two gun safety bills were introduced in the House and Senate on March 2. These measures would address the deadly “Charleston” loophole that allows a gun sale to proceed if a background check has not been completed in three days, extending the time frame for law enforcement. Keep an eye out tomorrow, as another similar bill is expected to be introduced in the Senate.

NCJW supports legislation to curb gun violence and championed both of these measures when they were introduced in the last Congress. The Background Checks Expansion Act was an NCJW Washington Institute 2019 lobby issue.

Hi, my name is [name], and I am a National Council of Jewish Women advocate from [city, state]. As a constituent, I urge you to support universal background checks and closing the Charleston loophole. Gun violence is the leading cause of death for American children and teens. These measures, overwhelmingly supported by the public, would save lives and protect our communities.

The Do No Harm Act (HR 1378), which preserves the Religious Freedom Restoration Act’s (RFRA) protection of religious freedom while clarifying that it cannot be used to harm others, was reintroduced in the House of Representatives on February 25. Amending the law will safeguard personal beliefs and prevent entire institutions or individuals from unlawfully discriminating against or coercing the exercise of another’s conscience.

NCJW supported RFRA when it first passed in 1993. The law was intended to protect the free exercise of religion and religious minorities, such as when a Sikh student was prohibited from wearing a turban at school or when a Jewish government worker was refused time off for Rosh Hashanah. However, since then, federal, state, and local governments across the country have blatantly manipulated the law in the name of “conscience rights” and “religious liberty.” The Do No Harm Act would ensure that RFRA is never again abused in this way by clarifying that the law cannot be used to harm others.

TAKE ACTION NOW! Use our Action Alert to urge your lawmakers to support the Do No Harm Act to restore RFRA to its original intent and protect freedom of and from religion today.

American Rescue Plan: The House of Representatives passed their COVID relief plan (HR 1319) on February 27 with many NCJW’s priorities, including a $15 minimum wage. Debate began in the Senate on March 3, and the Senate has changed the stimulus checks structure to impose stricter limits. They will likely remove the $15 minimum wage increase to get it passed before March 14, which is when expanded Unemployment Insurance benefits expire.

HR 5: The Equality Act (HR 5) passed the House of Representatives on February 25. This bill adds explicit protections against discrimination based on sexual orientation and gender identity to our civil rights laws. The bill would also add and expand legal protections for women, people of color, and many other communities. NCJW encouraged representatives to vote yes and celebrated its passage!

NO BAN Act: The NO BAN Act, which would prevent future administrations from banning entire communities from entering the United States, was introduced to the House of Representatives on February 25. On his first day in office, President Biden rescinded the Muslim and African Ban, which banned visitors and immigrants from several countries, most of which were majority-Muslim. However, it’s still critical to pass this legislation to prevent similar bans from happening in the future.

For the People Act: The House of Representatives passed HR 1, the For the People Act, on March 3. This bill strengthens and restores voting rights, offers new protections for voters, ends the dominance of big money in politics and implements anti-corruption, pro-ethics measures to clean up government. NCJW organized nearly 80 national, state, and local Jewish organizations to sign a letter to the House supporting the bill and a recommendation that representatives vote yes. NCJW CEO Sheila Katz participated in a livestream during the vote. NCJW applauds the passage of HR 1 in the House and will next focus on the Senate.

Dream and Promise Act: This bill, long supported by NCJW, would provide a path to citizenship for young immigrants brought to the US as children and Temporary Protected Status (TPS) holders. (TPS allows people whose countries face war or natural disaster to live and work in the US). On March 3, it was introduced in the House of Representatives. The Senate’s equivalent of this bill — actually two bills, the Dream Act and SECURE Act — has already been introduced. NCJW supports a path to citizenship for all 11 million undocumented people in the US and urges Congress to pass this bill.